"My Home Town" or "A Clique of a Different Color"

As I have said before, I grew up in a small South Carolina town which I have learned over the years was obviously quite different from many other small towns.  The town only had about 800 people and around 700 went to the 2 largest churches, a Methodist church and a Baptist church.  Of the other 100 or so, there were a few Presbyterians and a few families were Jewish.  In a nutshell, almost every person in town went to church on Sundays.  There were black folk and white folk and even some native Americans that all just seemed to co-mingle with not much thought as to any particular attribute other than we were all just plain "folk".   None of this seemed peculiar to me until I left that town at 17 and moved to South Carolina's capital city of Columbia.  While Columbia is not on the same level with cities such as Chicago, New York, or Los Angeles, it still caused quite a bit of culture shock in this impressionable young man.  People were not as friendly to one another as I was used to simply because there were too many of them.  Most of the people who were friendly were so in the cliques they had formed or become a part of such as neighbors, church members, work friends, social club members or whatever.  It was quite a contrast from that to which I was accustomed.
In all honesty, what shocked me the most was how impolite some people could be.  My third day in the city found me in a stalled traffic situation.  The gentleman in the car in front of me had some problem with the guy beside him to his left.  I could not hear what was going on but I saw him yelling as he threw his umbrella out of his window and at the other car.  It broke the other car's front passenger window.  The fellow in front of me jumped over into the emergency lane and took off.  The other car wiggled and wriggled itself to a point where he could also get into the emergency lane and took out after the first car.  I never knew what was really going on but I saw them again about a quarter of a mile later pulled over by a state trooper.  Granted I felt a little like Gomer Pyle from Mayberry but I was dumbfounded by such behavior.  As the days went on, I began to realize I had led quite a sheltered but extremely lucky childhood.
It took me until I was in my mid 40's and a lot of trips back home to figure out why there was such a difference in my home town culture and virtually everywhere else I had been.  In my home town, there was a great deal of respect shown for others at all times.  There was also a lot of help given to anyone who found themselves in need.  Folks got together a lot for all types of functions including civic celebrations, holidays, etc...  What I wanted to know was why these things were not to be found elsewhere other than in small cliques here and there.  Upon refection I realized my small town was a small clique.  There were families there that had known and worked with each other for a couple of hundred years.  The second thing that dawned on me was how lucky I was to have grown up in such a situation.  The truth of the matter is that most people that lived and worked in my home town simply loved being there and loved all the people around them.
I can't really speak of what was concentrated on in the teachings of the churches there but what I can remember is I heard an awful lot about Jesus.   Let me see now.  Jesus, love, peace, serenity, happiness.  Oh my goodness!!!  It almost sounds as if I have hit on a theme.  Isn't it time to get on board?

Posted by Brother David at 1:30 AM No comments:

God is Good and God is Love

In a little church I attended for a while, the preacher started every service by saying, "God is good."  The congregation would answer, "All the time."    Then the preacher would say, "All the time" and the congregation would say, "God is good."  I enjoyed this little ritual and it even became a way of greeting between myself and several other church members if I ever saw them away from church.  For me, I think it was just a way of reminding myself that God is indeed good and by being good, He is a God we should love.  That love should be based on His goodness.  All to often, however, that love is based on fear.  It seems to me that fear should not be a motivation for love.  If you love because of fear,  then that love becomes something you feel you must do rather than something you want to do.  Which would you personally rather have, someone who loves you because that's what they want to do or someone who loves you because they are afraid of you?  God is good all the time.  Which do you logically think He would rather have.
So many churches today hammer it into their congregations that God should be feared.  When Christ said the most important commandment under the law was to love the Lord thy God with all your heart, and all your soul, and all your mind, He was not whispering under His breath that we should be afraid. Jesus' entire ministry was centered around love.  It's amazing the impact He had upon this world with a ministry that barely extended through 3 years.  Even when He was upon the cross in agony, He asked God for forgiveness for those who tortured and persecuted Him.  That is love beyond the capabilities of mere mortal beings but we certainly could use the knowledge of it as an inspiration to let hate and prejudice go.  We could at least try to love.


Drop me a line anytime at gettoknowourlord@gmail.com. 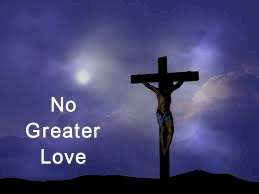 Posted by Brother David at 10:42 PM No comments: